Just added to your cart

Holiday Sale Has Started! Up to 40% Off! *Discounts Automatically Apply At Checkout*

If you’ve ever tried an activity that’s new to you - such as rock-climbing, yoga, horseback riding, or even joining a recreational league volleyball team - you may have found it difficult to get out of bed the next morning (or even the next couple of mornings!). That stiff feeling in your muscles is something that we in the exercise science world call DOMS, or Delayed Onset Muscle Soreness. This phenomenon occurs when tiny microscopic tears are made inside your muscle cells. That’s right! Not only do your muscles themselves tear when you exercise, but a part of your muscle cell called the Sarcoplasmic Reticulum, or SR for short, is damaged. Your SR holds onto important ions that are used in muscle contraction, but when it is damaged they spill out into the cell and your body activates an immune response. This soreness is what we call DOMS. It’s sort of like when you get sick and your nose gets stuffy or your eyes get all red. The inflammation and stuffiness is your body trying to heal itself. As a result of this immune response, your muscles feel painful and sore and because of how long it takes for all these things to happen you won’t even feel it until the next day or two! 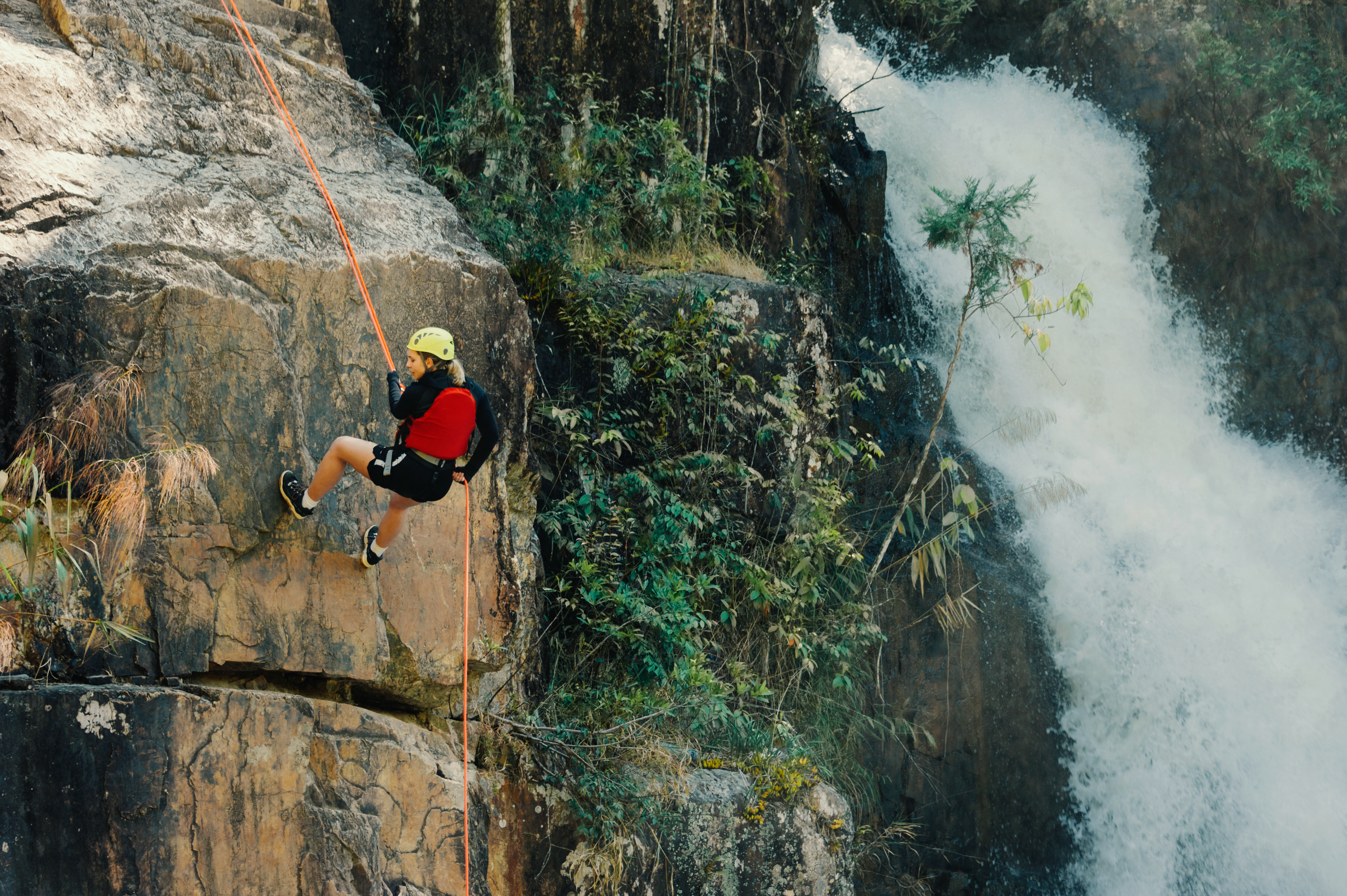 You might be thinking “I played football or ran track every day in high school. I shouldn’t get sore after playing a little bit of volleyball!”. While it’s true that exercise in general will keep you from getting sore (this is because of something called the Repeated Bout Effect) there is an important feature of muscle known as the SAID principle which stands for Specific Adaptations to Imposed Demands. This means that your muscles learn. Just because you do a million push-ups does not mean that you’re going to be able to climb a rope easily. If you want to become stronger and better at a certain activity, you need to practice that activity. This seems obvious when we think about it. The more we exercise, the less sore we get. You wouldn’t expect to see someone like LeBron James catching fly-balls out in left field for the New York Yankees (though I’m sure people would pay to!). This principle explains why you can get so incredibly sore when trying out a new activity. This observation is sometimes referred to as the Law of Specificity or the Principle of Specificity.

Okay, so now we know why that Saturday morning yoga class has left you feeling like you just ran a marathon, but what can we do about it? There are actually several effective treatments for DOMS, but we wanted to focus on the power of physical touch, or massage, and the mechanisms behind it. Studies have shown that manual manipulation, whether it be through professional massage or even self-massage with a foam roller or massage ball, are effective in relieving pain.

The first process of pain reduction that we’re going to look at is how touch reduces pain by fooling your nervous system. Have you ever stubbed your toe? Or bumped your knee? Burned your hand? How about closing your finger in the car door? I’m going to guess that you’ve done one, if not all of these things at one time or another. Think back to the first thing you did after this traumatic experience. It’s incredibly likely that you grabbed onto whatever your hurt body part was and maybe even rubbed the spot. The amazing thing is that this actually works! And it’s through something called Gate Control Theory. Gate Control Theory is based on the assumption that different nerves in your body bring information to your brain at different speeds. The signals of touch travel to your brain quicker than those of pain. Imagine that your brain was like the King or Queen of a castle that is your body. This ruler is in charge of protecting the castle and everyone in it. This castle has royal messengers and they tell the King or Queen what they need to know. Now, if every single false alarm of danger (such as a strong gust of wind, or a couple of medieval teenagers throwing mud on the castle walls) was interpreted as a need to rally the royal army and go to war, there would be so much chaos and confusion that there wouldn’t be time to respond to the everyday needs of the kingdom. It would be in the best interest of the messengers then to organize themselves; and whenever a frantic messenger is rushing to announce that war is imminent, another (quicker) messenger cuts them off and calms them down before they reach the royal hall. This way, maybe they can think more rationally about whatever ruckus they’re reporting. This isn’t exactly how nerves work, but it serves our purpose for explaining how the nerves that sense pain (nociceptors) aren’t as fast as the nerves that sense general touch. The faster nerves “close the gate” that the nociceptors take to get to the brain and as a result they lessen the pain signal. This is why squeezing your finger after jamming it in the door relieves pain! The same principle works in massage, foam rollers, lacrosse balls, and really anything that activates the nerves in your muscles and the surface of your skin. You can use any of these tools to relieve DOMS in your muscles either once you feel the pain, or immediately following your workout to prevent it. There’s another really interesting benefit to manually massaging (or applying pressure with another tool to) your aching muscles. Hormones. That’s right, hormones. When I say that word most people think of the kind of hormones that make teenage boys grow hair and get deeper voices and go crazy over teenage girls, but those aren’t the ones we’re talking about. While certain types of hormones do cause those things, a hormone is simply any substance made in one part of your body that is transported to another part of the body before being used to enact a change. The first hormone is Oxytocin which many people know as one of the “love hormones”. Oxytocin makes us feel good and it’s been shown in studies that touch can stimulate the release of this hormone into the blood which lowers pain! There is some speculation within some in the science community that SMFR (Self MyoFascial Release) which is a form of self massage may affect the nervous system and reduce levels of the hormone Cortisol. While studies have shown a decrease in comparison to a control group, the differences were not large enough to be statistically significant. There were several aspects of the study that researchers suggested altering in future experiments, as what they saw appeared to be promising. While cortisol is a useful hormone, high levels of it that result from both physical stress and emotional stress (that feeling you get when you forgot to study for the big test) are detrimental to both muscles and bones. If manual therapy is effective in reducing cortisol, it could have added psychological effects in addition to how great it feels on your muscles. One more weapon in the war on DOMS!

There are so many different ways to lessen the pain from that pesky DOMS that you feel, whether it be an old family secret, a revolutionary cryochamber that professional athletes use, or even just good old fashioned rest - but hopefully you learned something about how to better treat the pain you feel. Massaging your own sore muscles with a lacrosse ball, foam roller, or another tool like the Meteor is a quick and easy way to manage the aches and pains of everyday life.

Contraction- The action of your muscle flexing